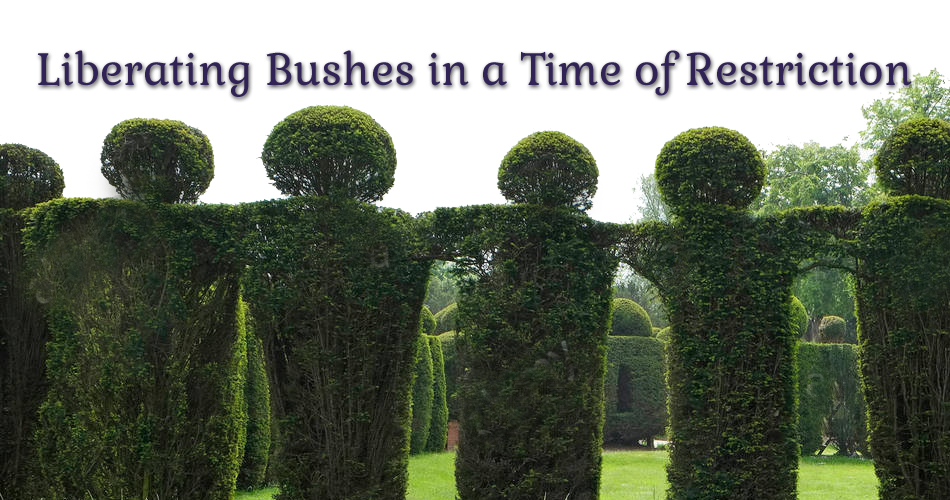 Yesterday I liberated our woolly bushes from the temporary fence which has stood behind them while they grew to hedge height. Today I pruned them so that they wouldn’t droop under their own weight of undisciplined growth.

Both actions symbolized for me some inner longing.

Acting on that impulse gave me a sense of hope and meaning in this time of coronavirus restrictions and losses.

I had gone to sit on the deck behind the woolly bushes and their fence, where I tried to pray and meditate. After dissolving in tears for all that we are missing in our religious and communal life at present, I had this sudden urge to take away the fence that separated me from the woolly bushes.

What did that action represent? I guess I was feeling restricted, like the woolly bushes trying to poke through the gaps in the stiff ugly temporary fence and growing distorted in the process. Mind you, when I took away the fence, the branches fell about in all directions, hence the pruning of the next day. Now the growth is slightly reduced but shaped to come together in a more connected, upstanding and graceful way.

Is that what will happen for us and our churches in this time of restriction? The Archbishop sounded a similar note in an email letter to clergy, in which he urged us not to combat anxiety or to justify our existence by making ourselves overly busy. Instead he suggested that we might be refreshed and inspired if we find time to read, reflect, and pray. In other words, prune back the excesses and encourage centred growth.

The encouragement to take time for spiritual disciplines and refreshment applies to us all. Maybe people in the wider society might feel the need for spiritual meaning and refreshment themselves. In part, my urge to liberate the woolly bushes expressed a desire to be more in touch with the beauties of the created world which refresh and inspire me.

Although we can’t meet for worship on the last Sundays in Lent, or, more devastating still, for Holy Week and Easter Sunday, perhaps we are being guided to enter more deeply into the spiritual disciplines of Lent, to share in the passion of Christ played out in our world, and to wait eagerly for new life to emerge from an empty tomb. There are signs already of how the restrictions placed upon humanity may mean revival in the created world: pollution lifting over Italy with few people using vehicles, and dolphins and fish returning to the canals of Venice. Maybe liberating woolly bushes is symbolic of increased world-wide awareness of the need for revival of creation by the restriction of the rampant overgrowth of human exploitation of natural resources for profit. Suddenly we are also made uncomfortably aware of how quickly shortages can occur when people are greedy and don’t think of others.

So what has liberating woolly bushes got to do with Jesus raising Lazarus, or the prophet Ezekiel calling on the dry bones to connect and stand up, ready for the breath of the Spirit? Both those stories are about liberation from death, loss and grief, and coming forth into renewed life empowered by the Spirit of God. When I saw that these were our stories for this Sunday, I was moved by how powerful they were to offer hope in this pandemic.

Reading how Jesus shouted loudly to Lazarus: “Lazarus, come out!”, I longed for Jesus to shout: “People of God, come out!”

We were already shut away by those who think we are a dying breed. The instruction to “Unbind him and let him go!” seems even more poignant, as we feel ourselves to be bound and hampered without our communal life. How changed was Lazarus by his experience? Who might we become if our time of loss shapes and disciplines us? Mind you, there was no easy road ahead for the revived friend of Jesus.

When the story spread, and more people believed, the chief priests and the Pharisees plotted to kill not only Jesus, but Lazarus as well. We don’t know the outcome of that for Lazarus. How would you feel having been restored from death to find yourself threatened with death again soon after? Such could well be the case for humanity if those in authority refuse to admit the need for change.

The story of Lazarus began with Jesus delaying his departure to go to his friends in their time of need until after Lazarus is dead. Both Martha and Mary reproached him with this delay, saying: “Lord if you had been here, my brother would not have died.” Sometimes we feel that God is absent in the worst of times, or that God fails to act to save us from anxiety and sorrow. Yet the suffering we experience prompts us to call on God with great intensity as the psalmist does in the first verse of Psalm 130: “Out of the depths have I called to you, O Lord: Lord, hear my voice.” There is something powerful and necessary in waiting for God that makes us more aware of how important God is to us. Verses 5 and 6 evoke that intense longing for God that causes us to look for the coming of a new day:

Let me share with you some quotes from Brian McLaren’s book Naked Spirituality. Those of you who received Richard Rohr’s emails this week will recognize what McLaren says:

“When we call out for help, we are bound more powerfully to God through our needs and weakness, our unfulfilled hopes and dreams, and our anxieties and problems than we ever could have been through our joys, successes, and strengths alone. . . .”

Returning to the story of Lazarus, I find another insight related to what McLaren says about naming our pain: it’s necessary to grieve, to share in the general pain of loss even if we do hope for restoration.

Some of the most moving verses in Scripture are verses 32 -36 of John 11: “When Jesus saw her weeping and the Jews who came with her also weeping, he was greatly disturbed in spirit and deeply moved. He said, “Where have you laid him?” They said to him, “Lord, come and see.” Jesus began to weep. So the Jews said, “See how he loved him.” It’s necessary to see, and to weep. That’s an expression of love.

I struggle with the call to see and to weep. I want to avoid seeing and I don’t want to weep, afraid of being overwhelmed. But Ezekiel could not channel the Spirit to raise the dry bones until he was transported to the valley, and until he was led around and saw how many and how dry the bones of the people of Israel were. The Spirit says: “Mortal, can these bones live?” and the prophet answers, “O Lord God, you know.”

Many churchgoers must be asking “Can these empty churches live?” Our humble answer must be, “O Lord God, you know.” Then we may be given words to speak or write, invoking the renewal of form and life.

Perhaps like the liberated and pruned woolly bushes, new growth and purpose will come to us. Perhaps, as in the passion, death and resurrection of Christ, new life will only come on the other side of the cross. Then we may hear our equivalent of what God says to the revived people of Israel: “I will put my spirit within you, and you shall live, and I will place you on your own soil; then you shall know that I the Lord, have spoken and will act,” says the Lord.