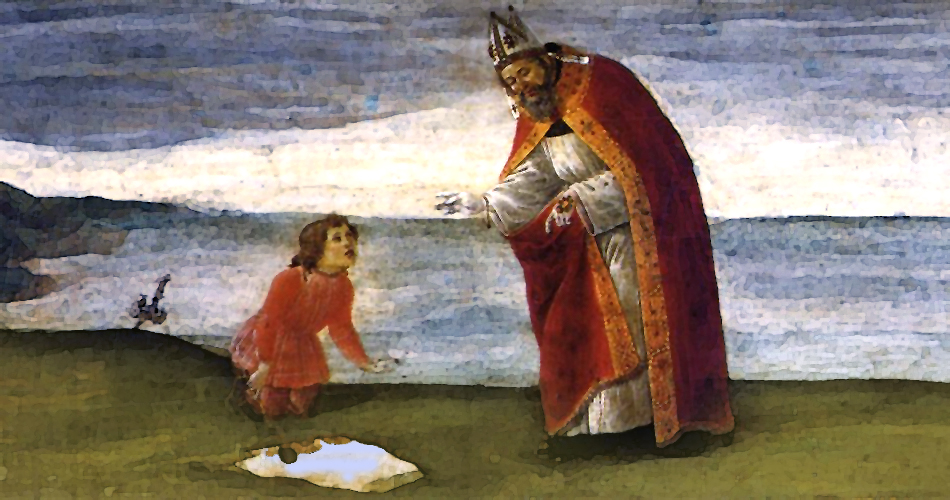 Winston Churchill, once said that Democracy was the worst form of government, except for all the other forms of government. He was quoting someone else.

Today, as we celebrate Trinity Sunday in the church, it’s worth remembering that the ancient theologians thought much the same way about the Trinity, i.e. that it’s the worst theory about God, apart from all the other ones that have been tried.

If you have problems with the idea then, don’t feel there’s something wrong with you. There’s an ancient legend about St Augustine. One day he was walking along the beach, contemplating the mystery of the Trinity and he came across a boy who had dug a hole in the sand and was going out to the sea again and again, bringing some
water to fill the hole. St Augustine asked the boy what he was doing and the boy replied that he was going to pour the entire ocean into his hole. ‘That’s impossible, the whole ocean will not fit into the hole you have made’ said St Augustine. The boy replied ‘and you cannot fit the Trinity into your tiny little brain’. And then he vanished, because he was one of those angels disguised as hole-digging boys.

I haven’t met one of the hole-digging angels, but I know what he meant when he said ‘you cannot fit the Trinity into your tiny little brain’.

It is for that very reason that one Australian theologian suggests we get rid of Trinity Sunday. Well, I’m not going to try to explain the Trinity to you and I hope you aren’t going to try and understand it
either. That would be trying to understand God. Instead, I’m going to talk a bit about why we believe in God as Trinity.

The reason we speak of God as Trinity is because we believe God really is that, and talking about God like that helps us not project what we want onto God and helps us not believe in something that is not God (idolatry).

In fact, all the great Christian beliefs about God can be traced back to the idea of God as trinity.

The reason that theologian suggests ditching Trinity Sunday is because we’re actually talking about God as Trinity the whole year, and when you put aside one particular Sunday for it, there’s a danger that it could be thought of as something special and different to how
we think of God the rest of the time.

Believing in God as Trinity is like having a set of guidelines for understanding God and being directed towards God. But we have to be careful, because every word used in the doctrine is used in a very limited way, so should not be taken literally. An example of that is the word ‘Father’, which the ancient theologians used to convey
the sense of God as relational, in a way that’s too big to go into here, but my point is that in no way did they mean God was male.

Remember in the story of Moses, how when God asks Moses to go to the Pharaoh and demand he let Moses’ people go, Moses asks in whose name should Moses tell Pharaoh he makes the command? God says tell Pharaoh ‘I am’ sent you.

In the gospels we hear Jesus using that term quite a bit – ‘I am the bread of life, I am the vine and you are the branches, I am the way, the truth and the life, and so on.’

Remember also the Ark of the Covenant – the holy box the people of Israel carried around in the desert and then stored in the temple. God was in there. It was God’s presence. But if you opened it up, you would find nothing. That says a lot about God and it also says that God is beyond comprehension. Just like the angel digging a
hole in the sand said. The doctrine of the Trinity is like that – the contents are incomprehensible, but they point us to God and help us understand our experience of God.

The doctrine of the Trinity helps to shape our imagination, so that we come to see God and are changed by what we see. So for example, we see that God is not an individual, but three, so God is not actually the name of a being, or the name of a person (like a human person), but is the name of a kind of life – eternal and self-
sufficient, always active, needing nothing. God is therefore ‘more a verb than a noun:

God is three relations… a mystery who can never be understood with our rational… minds.

God is a process rather than a clear name or idea, a communion, Interbeing itself and never an isolated entity that can be captured by our mind. (Richard Rohr. Immortal Diamond, 156)

To reduce the doctrine of the Trinity to its simplest form would be to say that God is Love and that means that all forms of love are experiences of God and participation in the life of God.