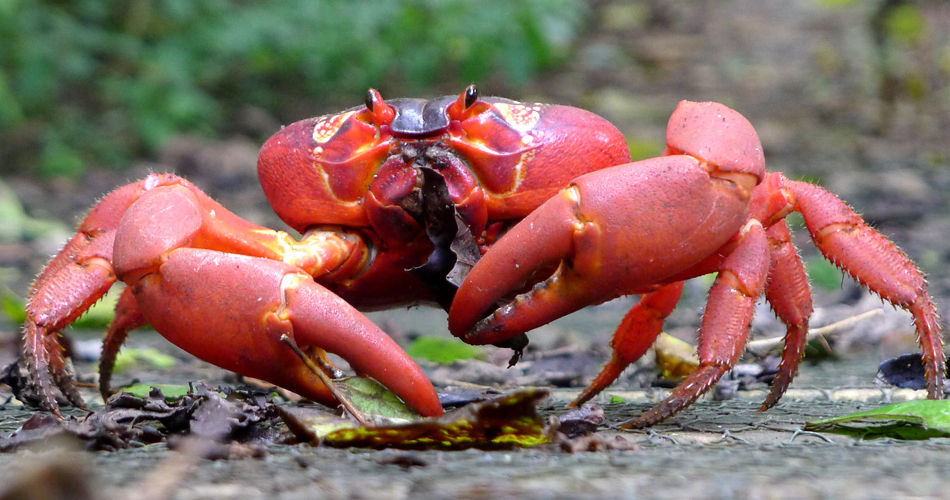 Christmas Island is home to about 90 million Red Crabs. They are a ‘keystone’ species, in that they eat seeds, seedlings and other things from the floor of the rainforest, keeping it clear, so the rainforest flourishes under their ‘management’. A few decades ago, scientists discovered the crabs were dying off, because Yellow Crazy Ants were killing the crabs. As a result, weeds and other plants growing on the rainforest floor increased, having a detrimental effect on the trees. Also, in return for sugar they produced, the Crazy Ants protected the scale insects which sucked on the tree sap. The scale insects increased in number, so the population of Crazy Ants grew, and so on, and then the trees began to die off. Along with that, without the Red Crabs to eat them, the numbers of invading Giant African Snails increased. This all shows that relationships between creatures are integral to their flourishing or not.

It’s not clear how Yellow Crazy Ants got to Christmas Island. They may have got there through human activity, but whether or not, they do remind us of the affect introducing a species to an ecosystem can have. We do well to pay attention to those verses in today’s psalm (8) which say ‘..you (God) have made us little less than gods..you have given us dominion over your handiwork and have put all things in subjection beneath our feet’. As elsewhere in the Bible, having dominion means using your power to care responsibly. An example of that is Kirsti Abbot, an ant specialist, who has worked with many others on Christmas Island to counteract the damage from the Yellow Crazy Ants.

Interestingly, Kirsti Abbott also worked in French Polynesia to help eradicate Crazy Ants. Her experience of going there shows that relationships are also integral to who we are as human beings. Kirsti went to the islands as a young scientist from New Zealand. The islanders welcomed her, but they struggled to relate to her as a single individual, away from family. As her boyfriend accompanied her, the islanders decided she was his wife. When she took her mother, on a later trip, she became ‘Peg’s daughter’. For the islanders, there was no such thing as an individual in their own right. Kirsti was only a person in relation to others, something we tend to forget in our individualistic culture.

The last American election campaign provided a perfect example of individualism, in Donald Trump, who prides himself on his own achievements, as a self-made man, while ignoring all those he has relied upon to get him where he is. The truth is we all depend on others to be what we are. Think of those who make it possible for you to do just what you’re doing right now, in terms of providing this service, providing your food, clothing and so on. No-one is really self-made or a pure individual.

If this relational interdependence that is integral to nature and humanity is overlooked, there is a price to pay, and we see that in the suffering of many people and creatures. Although you may have not been fully aware of the situation of Yellow Crazy Ants on Christmas Islands or the cultural ways of establishing identity in French Polynesia, what I have highlighted probably isn’t all that new to you. The reason I wanted to draw your attention to that is so that you can see how human nature and the rest of the natural world, exhibit something which for Christianity is at the heart of life, namely mutual relation. Today’s celebration of Trinity Sunday is about that. Not only do we remind ourselves that God is the power of mutual relation, but we also recommit ourselves to living in ways that reflect that in the world.

If we look to the life and teachings of Jesus, we see a wisdom there, in which human flourishing depends on mutual relations. Not only do we need each other, but we thrive by sharing resources and contributing to the common good. This morning’s reading from the Book of Proverbs speaks of this same wisdom as being present from the very beginning of the world.

Belief in God as Trinity is a central idea in Christianity. It sums up everything we believe in, but it’s incomprehensible. Superannuation is also incomprehensible, but only to the average person. If you apply yourself, you can actually understand it. The Trinity is not like that – and that should come as no surprise, because it’s God, who is incomprehensible, because God is not a ‘thing’ that can be grasped, but is underneath or behind all that can be grasped and is actually reaching out to ‘grasp’ us, which is what the formula describing God as Father, Son and Holy Spirit is saying.

Jesus referred to God as Father. In his time, the level of biological knowledge meant that the Father was considered the source of one’s life. The mother was thought to be merely a container for growing the life the father had implanted. But the term father also implied intimate loving care and for a male, inheritance, both genetic and material (which in sum, meant the whole of the father’s life was passed on to the son). All this was reflected in how Jesus talked about God, as creator (i.e. as behind all that is and all that is becoming), as caring (i.e. as loving the world and trustworthy) and as intimate to him, but also to everyone and everything (i.e. therefore as accessible). As Jesus talked about God as Father and demonstrated a specially close relationship to God, the early Christians spoke of Jesus as the Son of God. It also reflected their experience of Jesus as the flesh and blood presence of the Creator, which meant they didn’t see him as a representative of God, but actually God, so they called him God the Son. That’s like a star and the energy coming out of the star. They’re kind of the same thing, but different. We also talk about Holy Spirit, who may be considered as the energy within and between us, which makes us act and see things as God does. We can speak of the Holy Spirit as that which empowered Jesus, and we can also speak of Holy Spirit as the expression of the Creator’s will. Father, Son and Holy Spirit, therefore, represents God our source, God alongside us and God within us.

Although mysterious, God is not an impersonal force. We speak of God as three persons, meaning God is personal, but not in the sense that you and I are persons. In fact, the term person, as applied to God, means what it meant in ancient Greek culture, which refers to the mask an actor wore. In a way then, to speak of God as three persons is misleading, but it’s the best definition we have. The point is that when talking about God as Trinity, every definition begins to break down at some point and become misleading. The point of those definitions is to give our experiences of God a label, and to help us know what God is like for us. The Trinity is not an exact representation, but a model of God, which explains why we experience God certain ways, and why particular ways of relating to one another are life-giving, but others are not. For example, if life flows from God, and God is not an isolated entity, but a communion of three, then there will be more life in relationships that are of a mutual nature, than in relationships in which power is unequal. In countries run by dictators, in families run by fathers with absolute say in what goes, in marriages where decisions are not shared, in churches where ‘Father knows best’ – with those types of power arrangements, life will be diminished, even suppressed and deprived. That is why St Paul speaks of the necessity of interdependence between members for churches to be life-giving. And that’s supposed to be a model for humanity.

If this communion, community or dance, which we call God, is at the heart of all that is, then nothing and no-one exists in and by itself, or themselves. Everything exists and is interdependent, within this relationship called God.