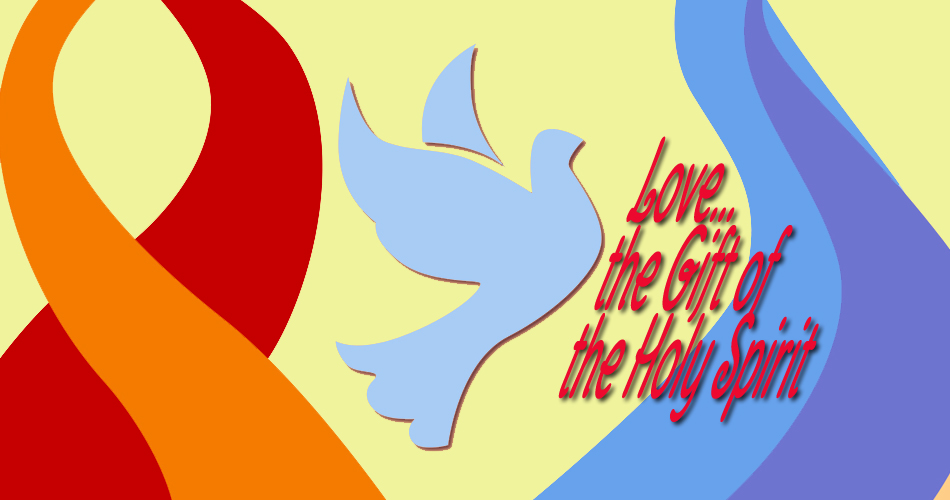 The great gift of the Holy Spirit is love

The great gift of the Holy Spirit is the ability to love. The Spirit enables us to love in situations where love seems impossible, because the Spirit is not driven by what stands in the way of love. It is absolutely different to the spirit which dominates the world, driving us into rivalry and setting us apart from each other.

Today we read the account from Acts of the day of Pentecost. It began as the Christianisation of a Jewish festival which celebrated the emergence of new crops from the earth. For the early Christians, it became a celebration of a ‘new’ spirit – especially manifesting itself through the energy which drove them out of hiding after the crucifixion of Jesus, to take their story out into the world.

Their mission was not to make everyone Christian. It was to set them free from what dehumanises, and therefore, free up God-given creative energies, such as the passion for loving relationships, compassion for the needy, and joy at creating life.

Pentecost is special because it represents a turning point in discipleship for those who followed Jesus closely. They went from bumbling idiots to inspiring leaders. When I say they were bumbling idiots, I don’t mean that in an intellectual sense. It’s not that their IQ’s were too low. The gospels kind of present them that way, as often they just don’t get what Jesus is on about, but it’s not about lacking brains. Similarly, often their commitment to Jesus’ Way was weak. Peter is the classic example, promising Jesus he’s with him 100%, but when the crunch came, he ran away. It’s quite normal though. We are like that too and that’s why woven throughout the gospel stories, there’s a mixture of failure and success when it comes to Jesus’ disciples. The point is that before the crucifixion, they didn’t really get what Jesus was on about, but afterwards, they did, which means often the stories can be read from both points of view. The reason Jesus’ disciples didn’t get what he was on about, was that their understanding was formed by the very thing Jesus was trying to dismantle. Until it was dismantled, it would keep shaping the way they saw things, their values and behaviour. They would never get Jesus and would never really be able to follow him, least of all take his message into the world, until the dismantling. And that’s what his crucifixion was.

Jesus’ crucifixion was a double revelation. It was a revelation about the nature of humanity and about the nature of God. What it revealed about humanity was that humanity was driven by rivalry. By showing us that about ourselves, Jesus sets us free from it. Just like when someone points out some silly way you’re behaving and you stop – you’re set free from it. The important thing is that the rivalry we are driven by is an entire perspective, and therefore it’s not so much the way we see things, but what determines the way we see things. It’s like if you put sunglasses with brown shades on, everything looks different. Looking at the world through the perspective of rivalry shapes everything, even the way we feel. To see that, consider two similar situations: one experienced through one perspective and another through a different perspective. The first is a two year old who refuses to share her cake with me. I consider her young and still to learn about sharing, so I am not personally offended. In fact, I find her selfishness amusing. Compared to that is the situation of a forty year old bloke driving his car in the lane next to me, but slightly behind. Flashing my indicator, to show I want to move into his lane, he speeds up and won’t let me in. He makes me feel angry. The joy I feel when he gets trapped behind a car turning right, as I zip ahead and into his lane, shows that he has become my enemy, or more accurately, I have made him my enemy. Similar situations, two people acting selfishly, but not only do I think of them differently, and behave differently towards them, but I even feel differently about them. All because of the different perspectives with which I approach them. As far as I am concerned, that bloke should more considerate. What I don’t realise is that his wife died yesterday, and he’s not able to think of others at this time. The point is my perspective makes all the difference.

In the second instance, with the forty year old bloke, my perspective was one of rivalry – competition, survival by excluding the other. Jesus’ crucifixion reveals this as the basic perspective which drives our thinking, feeling and behaving. We’re a bit familiar with the crucifixion, so let’s look at similar circumstances. An often-asked question is ‘How did a Christian nation, such as Germany end up doing such horrendous things during WW2?’ or we might ask ‘how can a caring world let a little boy fleeing from the war in his homeland end up drowned on a European beach?’ It’s exactly the same mechanism at work when we find ourselves satisfied to be ahead of some inconsiderate driver on the road. It’ s the same mechanism at work when we find ourselves comparing ourselves to how well others are doing, or whether our clothes are up to their standard. Or when we worry about being inferior to others. It is the perspective, the mechanism, or ethos, underneath all that, which is put out there for us to see in Jesus’ crucifixion. It’s God saying ‘this is what you do’. And if you look at Jesus, you’ll see what it does to others and what it does to yourself. That’s what I mean by Jesus trying to dismantle the perspective of rivalry.

The disciples still don’t get it though. When Jesus dies, they interpret that through the perspective of rivalry, which means they see it as him losing the fight. When he is raised from death, they are embarrassed, because in their weakness, they abandoned him, leaving him without support, and so they played a part in him losing the fight. It is only when he tells them that that doesn’t matter, (in other words, he forgives them) and he has never held that against them, that they finally ‘understand’ that there was no fight, and that is what Jesus has been trying to teach them all along: there is no fight, no battle, no rivalry in him. Life is not about that. In experiencing that being forgiven, Jesus’ disciples gained a new perspective – the perspective of Jesus, which is what we call the Holy Spirit. It is what drove Jesus all along.

Pentecost celebrates that acquiring of the new perspective by Jesus’ disciples – from then on, they would see how much humanity was driven by rivalry, and with that way of seeing, could begin to let themselves undo that way of living and tell others about it too. They weren’t trying to make everyone like them – that would be continuing to operate out of rivalry, where you need people to be like you, or do as you wish. No, they had been ‘taken hold’ of by a Spirit which was totally opposed to that.

In the account of Pentecost from the Acts of the Apostles, those gathered are able to understand one another, despite speaking different languages. The reason is they share the same perspective. It’s just like when two people get married. They are different individuals and yet work well together because they share the same perspective, which is of love, not rivalry. Notice that the people gathered, do not need to give up their distinctiveness. The Spirit energises distinctiveness. Rivalry smothers it. Lastly, in the Acts account, we hear of the Spirit pouring out and being like a fire. What we should take away from that is not to see it as like a substance that you can get a certain amount of, but as energy, which creates, through setting free, affirming, inspiring, igniting passion, in short, through the gift of love.