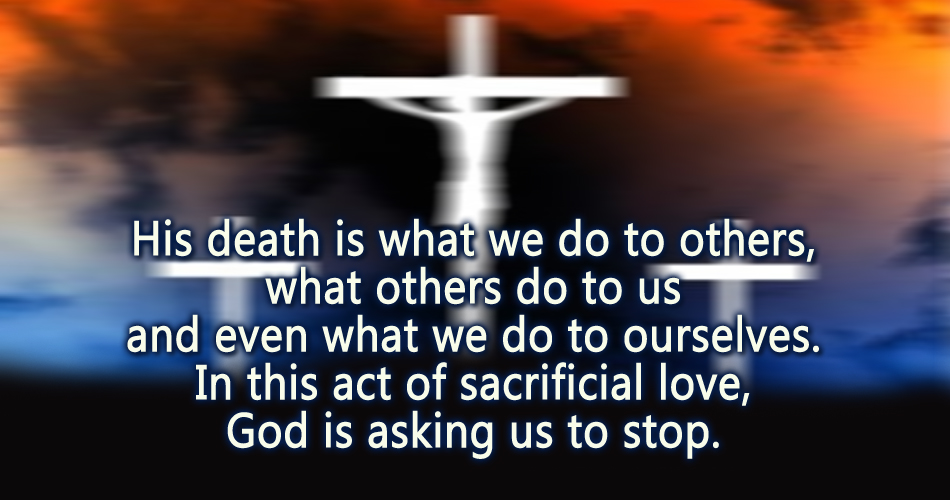 The cross exposes the violence of the world

A ten year old should be able to understand why Jesus died on the cross, so I’m going to attempt to explain it to your inner ten year old.

Imagine a class of school kids. There’s one kid who’s a bit odd and the rest of the kids pick on him. Why do they pick on him? For any number of reasons. Maybe they just decided he’s a dickhead. Jesus comes along and takes the place of that kid. Now, instead of picking on that kid, the class turns on Jesus. Together the class feels strong and united, but that kid is set free. That’s why Jesus died on the cross.

Notice there was no mention of God. It’s purely kids ganging up on someone.

Now I’ll give you another version of the same thing, but this time, because it’s adults involved, it’s more sophisticated. They can’t just gang up on someone for being a dickhead. They need a more sophisticated justification.

This is a group of adults who bear the titles of Scribe and Pharisee: they’re the interpreters of the law and the keepers of the law. Someone comes along who they don’t like because he challenges their teachings, so they create a reason to gang up on him. They claim he has broken their laws and if they don’t put a stop to it, society will fall apart. Deciding he must die strengthens their identity and forges a friendship with the Romans, with whom they were previously enemies. It is for the good of the nation.

Now Jesus is not dumb. He knows they operate like this, so why does he play into their hands? Why does he antagonise them, knowing what it will lead to? Throughout the gospels he makes it clear he knows what’s going to happen. It’s not anything that God will bring about. It’s simply what happens when you challenge those who like power.

As with the example of the classroom, Jesus chooses the place of the victim, and he does so intentionally. He seeks to draw out the truth, make those with power show their true mode of operation. When someone is picked on for reasons others find acceptable, the violence against them is accepted, even considered respectable. But when the victim is a good man, who has done no wrong, then the violence done against him becomes obvious and the system which destroys him loses its justification. Exposing the truth takes away its power.

Part of the sophistication when adults act in this way is the creation of myths which justify the violence done to the victim. Many ancient myths served that purpose. Even Christians have done that too, creating the notion that God has been offended by human sin, so punishment is required to restore the relationship between God and humanity. Then Jesus was slotted into the role of the one to be punished and order is maintained: peace between God and humankind is restored. All it requires is allegiance on the part of believers to their status as law- breakers, who should show gratefulness for God’s kindness to them.

But did God actually ever actually demand punishment for human wickedness? You might point to those numerous stories in the Old Testament in which God certainly does. There are even stories of God punishing people for simply not being his chosen ones. Usually myths and accounts of history hide or gloss over the violence done by the victors, who are also the ones who write the, but the Old Testament is different. There, the violence becomes increasingly explicit and therefore increasingly difficult to justify, eventually reaching a point where there could no longer be any justification for claiming that God was behind the violence toward victims. That leaves the only conclusion to be that God has nothing to do with the violence and it is nothing other than human violence, projected onto God. The ultimate revelation of that is in Jesus, in whom God demonstrates an absolute absence of violence.

Not only does God not require punishment for breaking the law, code or rules, but God chooses to stand in for the victim human beings require, in order that we may see what we do.

Christians have not always grasped this. That’s because when we really get what Jesus did by allowing himself to be made a victim, is starts to undo something that is integral to the way we live with one another. Like everyone else, we are used to this mechanism which creates and maintains order through creating victims. It is so entrenched into our way of living, that it shapes the very way we see life. The need to create victims is not seen as something we choose, but something that is given. We believe there just are people who should be sacrificed for the common good.

So there is a Christian version of human sacrifice, for which the myth of Jesus as crucified to appease God for the wickedness of the world, provides the mythical underpinning. It makes everyone a second generation victim, by forcing them to accept that they should have been sacrificed for their sin, but in his kindness God sent his Son to take their place. Yes, God did send his Son to take their place, but not because God required it. God sent his Son because humanity requires it. Humanity required sacrifice for sin, for breaking law, violating code or just going against the status quo. God sending his son is not passing the buck. It is God in human form allowing us to sacrifice him so that our mechanism of maintaining goodness and order may be undone.

This Christian version of the sacrificial mechanism can lead to a sense of unworthiness, in which people feel there is something wrong with being labelled as perpetually disappointing God and depending on God’s condescension to be right with God. Only by absolutely not resisting human violence could God convince us that God has nothing to do with that.

By taking on the role of victim and exposing the labelling of individuals as sinners who should be punished, as a lie, other victims of this mechanism are set free. The leper who was told that he must be excluded from society because God doesn’t like lepers, discovers it’s a lie, and God doesn’t hate him at all. The woman caught in adultery. The woman who met Jesus at a well. Outsiders discover they are not outsiders with God. It’s a lie made up by human beings, who they no longer need fear, because the greater authority, God, requires no sacrifice for breaking the status quo, challenging the order of society, its rules, codes or accepted way things should be.

The trouble is that we are caught up creating outsiders, labelling others as sinners, and deviants, sacrificing them to our need to maintain a sense of being right and good. Their suffering makes us feel strong. Jesus’ death on the cross calls to us through their suffering and calls to others through the suffering they inflict upon us, to stop and find another way of living together. The sin of the world Jesus saves us from is bullying, victimisation, sacrificing one another for the alleged social good.

He saves us by showing that his little part of the world is run by the same mechanism which very much runs the whole world, including our lives. His death is what we do to others, what others do to us and even what we do to ourselves. In this act of sacrificial love, God is asking us to stop.