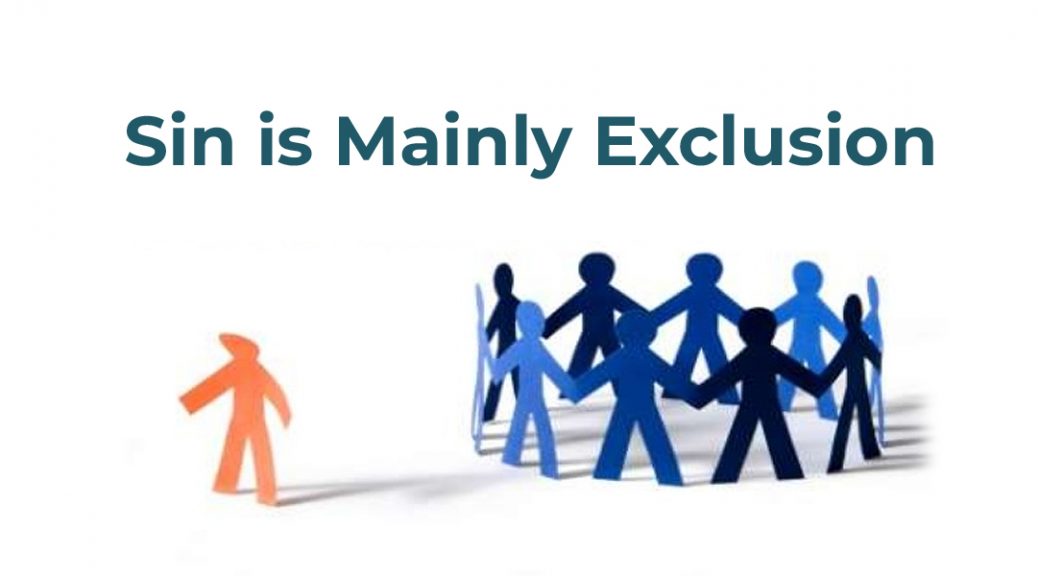 Have you ever asked yourself the question ‘Am I a good person?’ Sherlock Holmes did – at least the one on the British series Sherlock. He’s someone who didn’t care too much about how his actions affected others, so he sometimes did things that he knew would be considered bad by society, and yet, he still wanted to know if he was a good person. It’s a question that’s often addressed at funerals, with a person’s plusses and minuses being tallied up, so that we can believe that, overall, they were a good person. Sometimes people tell me that even though they don’t believe in God, they live their life considerate of others and doing no harm, or I’ll be told about another person, who is so good, ‘they’re more Christian than many Christians’. The assumption there is that being Christian is all about being good (and nothing to do with what you believe or belonging to a community of faith). Sometimes I find myself thinking of another person as a good person, but then feel disappointed when they prove to have flaws, like everyone else. There is something comforting in believing that people are basically good, which makes me wonder how much I like to feel that about myself.

There was a girl who wanted to buy a fancy dress for her school formal. It cost $2,000. She only had $250 and her parents wouldn’t buy it for her, so she went to extraordinary measures to get it. She learnt to play Blackjack so she could win the money at a club. She lost it all in the first few minutes, but on the way out of the club, won $3,000 on a poker machine. That paid for the dress and a limo to take her to the dance. Why did she go to such an effort? Because she wanted everyone at the dance to be impressed when she arrived. It’s a story from a movie, but it’s real, in that it addresses that same question of ‘am I a good person?’, except that the girl was guaranteeing her answer. If everyone at the dance admired her dress, they admired her, and that made her into a ‘good person’. Being ‘good’, here meant being acceptable to her peers, being approved of, being ‘in’. It may seem that her sense of what being a good person is, differs to what we might mean by it (e.g. for us it more likely means being morally good – considerate of others, not selfish etc), but it is still the same mechanism involved.

Behind the question of whether or not I am a good person, is the assumption that I need to be. It is better to be a good person, than to not be. That’s because being a ‘good person’ is about inclusion, – being part of the group. Not just any group though. If that girl’s parents had forced her to wear a dress she didn’t like and wouldn’t win the approval of her peers, it would not matter that her parents approved, because they are not the people she requires approval from. It doesn’t really matter which group we want approval from, because the same mechanism is involved. We may even just want approval from ourselves, and here there’s a distinction between simply being happy with our choice and needing an actual sense that we’re doing the right thing or the best thing. Doing the right thing or the best thing indicates there’s a ranking and we’re still concerned with where we fit in the scheme of things. Equally, we might be concerned with where we stand in regard to God. There’s the story of the two men praying in the temple. The Pharisee’s prayer involves giving thanks that he is not like other people, such as thieves, rogues, adulterers, Crows supporters, or even like the tax-collector, praying next to me. I read my bible each day and give money to the poor. The other man, the tax-collector, simply prayed ‘God be merciful to me, a sinner’. Jesus said it was the tax-collector who went home right with God. He was right with God, not because he put himself down, or wasn’t boasting, or because, human beings are generally bad and so should admit it. He was right with God because he didn’t compare himself with others, and so wasn’t run by that mechanism of inclusion and exclusion I have been talking about. It means if he went to a school dance, he would not be concerned about what he wore, because he had no need, no desire, for others’ approval. He would not ask ‘am I a good person?’, meaning am I acceptable?, because he knew with God, there are no such categories. What he was clear on though, was that he was imperfect. Asking God to have mercy on him, as a sinner, was really only part request for mercy or love. It was also a reminder to himself that he always had God’s mercy, God’s love. And his prayer was also a means of reinforcing that. Imagine if that schoolgirl could be like that –to really not need others’ approval. What a powerful person she would be!

Today’s gospel story of Jesus healing a blind man is a huge story, with a lot going on in it. Jesus says something about the man’s blindness being a means through which God’s works might be revealed in him. That’s all about Jesus’ role in completing God’s unfinished work of creation, so let’s put that aside for now. It’s amazing that Jesus could help a blind person to see, but the story is really to do with what I have been talking about. It’s yet another story from John’s Gospel, involving a revolution in the understanding of sin. The story begins with someone being excluded as a sinner on the grounds of having some sort of defect, and in the end, we are shown that the real sin is the act of excluding. This excluding peaks at the point where the religious leadership drive the man who had been blind from the synagogue. The mechanism of exclusion is what the church calls original sin. In other words, it is the flaw in humanity from which all other flaws flow. Even Jesus’ disciples are caught up in it, driven by it. It is something we inherit though, in the sense of taking it on through socialisation, and so we don’t have much choice in regard to it. We take it on because it’s ‘normal’, it’s the way the world operates. It’s what put Jesus on the cross, and because it’s not a conscious choice, but something we are socialised into, Jesus asks God to forgive those who exclude him, kill him, for they don’t know what they are doing.

In other words, they are blind to what they do, and that’s what’s also revealed in today’s gospel story. Jesus’ disciples, the man’s neighbours and the religious leaders are all blind to what they do to the man who was born blind. They are the real blind ones. At the end of the story, Jesus tells the religious leaders that their blindness remains, that they remain in sin, because they are in charge of one of the institutions through which the mechanism of exclusion operates, and worst of all, operates in the name of God. The greatest sin of all is to exclude in the name of God, to claim it is what God wants, to justify it as God’s will. The others, those not the religious leaders, are not doomed to remain in their sin, because they’re not opposed to Jesus, and therefore are able to be set free of their addiction to exclusion.

That setting free is done by the risen Christ, who declares all who engage in exclusion, forgiven. And only by being forgiven, can they then look back and see what it was they are forgiven for. The same is true for us. We might think that God forgives us because we say sorry for bad things we have done. That may be, however, if our saying sorry is another form of exclusion, then our very act of saying sorry for our sins, is actually the real sin. Being obsessed with how bad we are, because it makes us ‘not a good person’, is being run by the mechanism of exclusion. It’s acting in the same way as those who drove the ex-blind man out of the synagogue, except it is ourselves we’re driving out. This is why our confession and absolution isn’t about God letting us off the bad things we have done. It’s the other way around actually. We’re actually forgiven before we confess our sins. (Even though it’s the other way around in our service.) First, we are forgiven for being run by the mechanism of exclusion, which is a form of rivalry, and then, being made aware of that, or remembering that, we say sorry, we confess that it has been so. Doing so enables us to receive forgiveness. For this reason, the question of whether or not I am a good person is totally meaningless and irrelevant. What matters, is that I am loved by God.