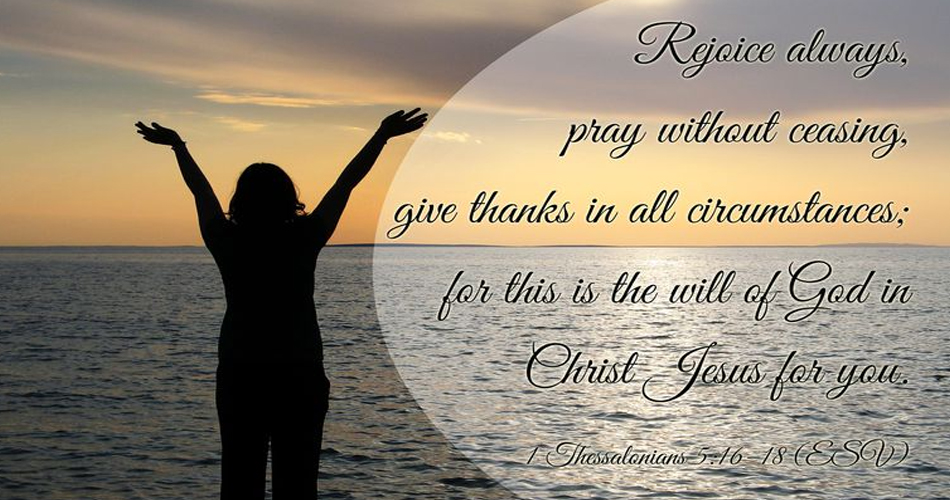 Rejoicing at all times takes us beyond them

Our Prayer of the Day makes a connection between seeing God and rejoicing. It can work the other way around as well, in that when we rejoice, we see God, or connect with God, in some way. But for that to be the case, our rejoicing has to be independent of our circumstances, which it will be if it’s intentional, i.e. something we choose to do. One way to do that is to constantly give thanks.

Some years ago, upon entering the carpark at Norwood Foodland, I was surprised by a woman in her car waiting to leave the carpark, with a big smile on her face. It’s not often that you see someone who has got through the stress of weekly grocery shopping and is being held up in leaving the carpark, smiling. The reason for her smile was that the person holding her up, who was the woman in charge of directing traffic in and out of the carpark, could be described as the friendliest person in the world. She gave every driver arriving and departing a huge smile and long hello or goodbye wave, as if she was their best friend. As I ventured into the depths of the shopping centre carpark I noticed that I didn’t have my usual feeling of resignation at having to do the shopping. Instead, I felt grateful for the mega-warm welcome, and amused by its effects upon others.

If St. Paul was alive at that time, he would have done his grocery shopping at Norwood Foodland, because he was an advocate of giving thanks in all circumstances, and that’s what their traffic controller was doing. Her version was to give thanks for all people. In suggesting this, Paul was being very Jewish, for giving thanks in all circumstances has been part of their faith for thousands of years, and was then carried into Christianity, hence, scripture has over 130 examples of encouragement to give thanks.

In the Judeo-Christian traditions, giving thanks in all circumstances is not doing that. We just have to look at the psalms to find evidence that it’s not about ignoring hardship, because often the words of thanks to God (which are also words of praise) are preceded by expressions of grief and suffering, and sometimes anger for how bad things are. And it was reported that Jews who were killed in Nazi concentration camps, recited psalms of thanksgiving to God before they were led to their deaths. So giving thanks in all circumstances is not about being grateful for what is happening or for what you have received.

Giving thanks in all circumstances is not escaping from the way things are, rather, it is immersing ourselves in God. It is not a substitute for reality, but an awareness of another kind of reality. It is connecting with what lies beyond the present, which differs from what is being promoted, or valued, or used to justify what is happening. For the Jews being put to death, expressing gratefulness to God was a protest and a proclamation that there was a reality that was greater than the evil being done to them.

Giving thanks in all circumstances is putting things into the context of divine providence. In other words, believing that whatever happens, no matter how bad it is, in some way, will be caught up in God’s loving activity and redeemed. It is trusting God.

The Eucharist, which is at the heart of what church is, means giving thanks. The depth of what it means is conveyed when we consider that it was on the night he was betrayed that Jesus took bread and gave thanks. Jesus gave thanks to God, for all that God is, and all God gives, even when he was about to be killed. Perhaps it is when we are most threatened that we most need to give thanks.

Remembering the way God thinks of us is so important, especially in the times we feel bad about ourselves, such as when depression strikes. Giving thanks to God is another way of remembering how God thinks of us, which is with unconditional love and pleasure.

One of the oldest words of praise for God is alleluia. In fact alleluia means ‘Praise God’ (praise Yahweh to be precise). In the New Testament it is an emotional term of praise. In the Old Testament it is a call to see in life more than is visible at any moment and trust it. It calls us to see life as life-giving, even when that is not apparent, and so it can carry us through good and bad, confidence and despair. Alleluia welcomes the complexity of the moment, and subjects it to the bigger picture (Joan Chittister in Uncommon Gratitude). Giving thanks in all circumstances then, is a means of centering ourselves in God, and becoming less self-absorbed.

There can be good reasons to give thanks even when things aren’t going well. Often the times we have grown most have been the difficult times. It’s interesting that scar tissue and healed broken bone are the strongest. And often things that are unseen or taken for granted are the most valuable things in our lives, especially our close relationships, e.g. I may have just lost being elected president of the bowls club, but my husband still loves me. What is of spiritual value in life may not be valued in other ways.

These are obvious reasons for being grateful, but there are times when even with hindsight, nothing positive and worth being grateful for seems to be present. These are the most difficult times to give thanks, but they are when we go to the heart of what giving thanks to God is about – not what we get from God, but the value of our relationship with God and the trust that holds us close to God.

In the Christian monastic tradition there is a practice known as Statio. Its purpose is to centre us and make us conscious of what we’re about to do. It makes us present to the God who is present to us. Saying grace before a meal is an example of Statio. Giving thanks for food makes us conscious of God’s goodness to us, as well as our reliance upon other creatures of the earth for our sustenance. An ancient and pre-Christian version of grace was the practice of ancient hunters apologising to an animal they had killed for food. It was an acknowledgement of the life taken from the animal, as well as the hunter’s dependence upon the plants and animals around them. Gratitude like that reminds you of your place in the order of things.

Grace before meals isn’t just giving thanks for the food we receive. It’s also an expression of confidence in the goodness of life (that God gives us). And it’s another means of becoming conscious of our connection with all of life on the planet, and our responsibilities there, especially towards those who lack what we enjoy.

It is worth fostering a habit of giving thanks in all circumstances on a regular basis. Regularly doesn’t necessarily mean daily, or hourly, or according to any schedule, but in an ongoing manner. Some of the best times for the practice of Statio are times of transition, when between situations. It could be when waiting at traffic lights, or in the queue at the supermarket. Rather than being frustrated that things aren’t moving as fast as you would like, use the opportunity to give thanks to God for something.

We are about to enter the Christmas frenzy. Some of you may have already ventured in. In that, there are always moments when we feel that what we are caught up in is far from what Christmas is about. We can let that feeling smother us, or we can use that time to practice a bit of Statio. Use it to give thanks to God for something. It may not distract us from what annoys us, but over time and probably mostly unconsciously, it will shape our souls to become more centred on God, and in time that will give us a greater ability to be present amongst what is life-denying, because we will know, more and more, that the One who gives life is present, and whatever denies that or works against that is only temporary. There is another reality, and that’s where our hearts lie. We live on earth but are fed by heaven.