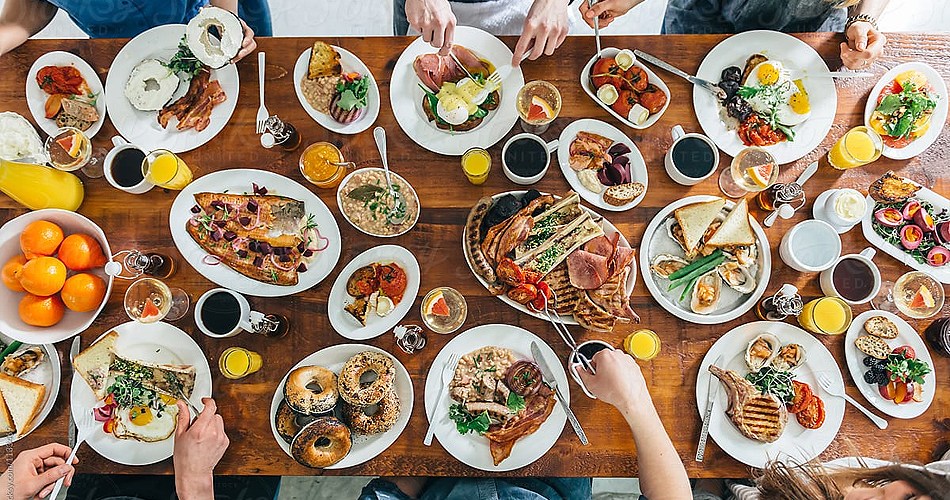 The story of Jesus feeding five thousand plus people is one of the miracles Jesus performed, which makes him a person we want to grow closer to. We want to know how he is relevant to our lives, and what is the nature of his miraculous power? To find out, we need to know what Jesus really did with those people seated on the grass that evening. We’re told there were five thousand men, plus women and children. I suspect women weren’t normally counted at public gatherings because they were blessed with the joy of the kitchen sink and ironing board, and children were probably at home too. They’re included here because men, women and children made up the main groups of society, as they still do today in many middle-eastern countries, eating separately – but notice here, they eat together!

Let’s go straight to the obvious question: did Jesus make enough food to feed all those people from just five loaves of bread and two fish? The answer to that question is hinted at in the beginning of today’s story, with Jesus withdrawing to a deserted place because he’d been told that Herod, who had chopped off John the Baptist’s head, thought that Jesus was John the Baptist returned from the dead (which was why Jesus could do amazing feats). How likely is it then, that having heard that, Jesus would decide to perform an amazing stunt, which would light up Herod’s radar and his desire for a bit more head-chopping? Fairly unlikely!

To understand this story, we need to consider the importance of meals in Jesus’ day. Dietary laws were the major hot point of his culture. Today’s equivalent might be something like public statues, in which a number of cultural and political ideals and changes are churning around and clashing. In Jesus’ day, what you did with food reflected how respectable you were. In other words, whether you were a person who ‘did the right thing’, whether you were someone who respected your culture and national history, and whether you were faithful to God.

Orthodox Jews (‘proper’ Jews – in their own eyes) would go to special lengths to make sure they ate only certain foods, in certain ways and mostly only in the company of other orthodox Jews. If not, their food could bec0me contaminated by the impurity of non-proper Jews. Even eating with other Jews was risky then, but far more stressful, was eating with non-Jews, and that was becoming more difficult as their society became more multi-cultural.

When the crowd of people gathered in that deserted place to hear Jesus, there were probably orthodox Jews among them. Some may have been interested to hear what he had to say, while others might be looking for faults in his teaching, but none of them would be going to McDonald’s on the way home. They would have come prepared with their own food, to ensure they wouldn’t be caught out having to eat other people’s food.

Jesus had been teaching the crowd and when you read the gospel passages before this story, there’s lots of his teaching about what the kingdom of God was like. Now Jesus decides he’s going to get the people there to act that out: they’re going to eat together. So, I don’t think Jesus whipped up more bread and fish. I think he got people to eat together: that was the miracle.

Don’t forget that the definition of a (religious) miracle is not that something amazing occurs. It’s that people’s hearts are transformed. The only relevance to people’s hearts, of Jesus providing heaps of bread and fish to eat, is that they won’t have to take their fish-oil tablet that night. Getting people who never eat together, to eat together, changes lives.

Imagine if you could get the people who want to tear down statues of flawed men, to have a cup of tea with people who like those statues. Imagine if you could help them to see each other as human beings and learn something from one another, that could benefit both groups of people. The Advertiser report might say that there were five thousand statue-removalists present, besides statue appreciators.

To be able to bring about such a way of being together is the power that Jesus wields. That’s what attracts us to him. But what’s its significant for us? Its significance is that he gives us that power too. The story presents Jesus’ action as eucharistic. His actions of taking bread, blessing it, breaking it and sharing it, are what we do in the eucharist. Jesus gave us that ritual so that we could partake in, but also enact ourselves, his transforming power to change the world, to bring about the kingdom of God: the life of mutual care and enrichment.

That’s all great, but how did Jesus get those people to share their bread and fish (and perhaps vegemite sandwiches)? Jesus’ disciples suggest he send the people away to get tea from nearby towns, but Jesus tells the disciples THEY can feed the people. They haven’t yet grasped that they can do that, so Jesus might have said something like ‘okay watch this and learn..’ Then Jesus tells the people to sit down on the grass. In Greek it really says to recline, in other words, lay back and relax, like when you go to a friend’s house and they put a gin and tonic in your hand and tell you to sit back and relax while I get tea ready. Something about Jesus has the power to make these people loosen up and let go – people who can’t even relax around their own people, in case they somehow become affected by their impurity (or today we might say can’t relax, in case they become tainted by other’s political incorrectness).

The people eat together because God has moved their hearts. God has moved their hearts through Jesus’ attitude towards them. He relates to them, not as selfish so and so’s, but as potential sharers with open hearts. In Jesus, they experience God, who knows nothing of purity laws, nothing of political correctness, nothing of contamination from those who are politically incorrect. Jesus neither approves nor disapproves of any group of people: such categories of judgment are non-existent for him.

In Jesus, the crowd are engaged with the One for whom there is no such thing as not enough to go around, for whom there is no such thing as scarcity and the need to compete. They are engaged with One who is encouraging them to let go of those humanly-created, death-dealing concepts and see what way of living they can create together. That is the power of the Creator, who can bring forth something out of nothing: the power to create a banquet from people who won’t normally eat together.

As we share bread and wine together then, will there be a miracle for us? Will the divine power we see in Jesus be able to transform the world through us? It depends whether we’re willing to give up our belief in scarcity and there being not-enough and trust that whatever is needed for our mutual benefit is always available. It will be available if we let our desire be reshaped by the One who has no concept of us being inadequate or lacking anything, but only ever looks on us as more than enough.