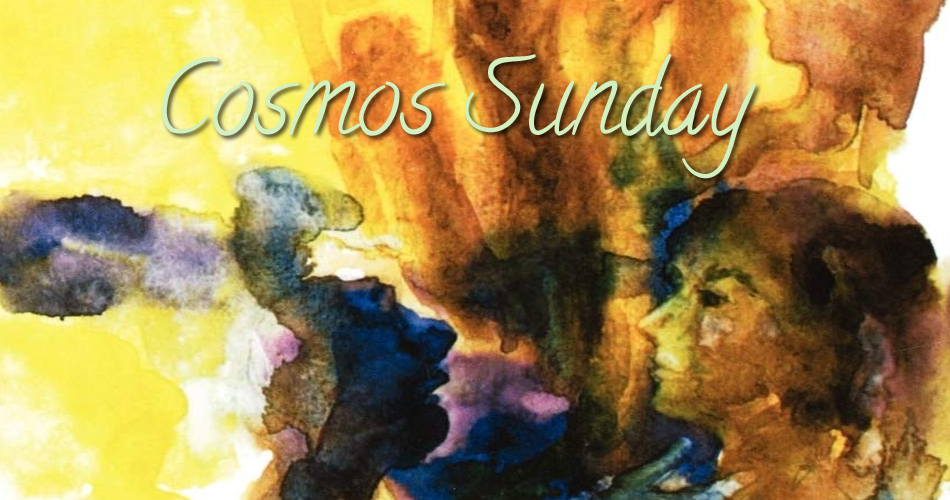 Today is Cosmos Sunday. The word cosmos comes from the Greek word kosmos, meaning ‘the world’, ‘order’ and ‘harmony’. So it’s more than just considering all there is; it includes a belief that everything kind of holds together as one. Different cosmologies provide different ideas about what the world is. They help us understand the world and possibly find meaning in it, and also can help us decide what matters most.

As a Christian, I look to the cosmology of the Bible, but also to the evolutionary view of science in order to understand the world, work out what matters, what the purpose of my life is, and then how to live. Some people struggle to hold together the world views of the Bible and science, so for the rest of this sermon, I’m going to look at various worldviews or cosmologies, ending with the one that works for me.

I’ll start with scientific materialism, because it’s the prevailing worldview of our society, shaping how we see the world, how we “know” things, and it shapes our values. Scientific materialism is not the same as science, rather, it’s the view that only matter is real, and that only those things which are tangible and can be measured, seen, touched or tasted, are real. It also assumes that scientific method is the only valid means of attaining knowledge. When we find it hard to take spiritual matters seriously, it’s often because of the influence of scientific materialism upon our thinking. Next week we’re celebrating the existence of angels -try fitting that into the scientific-materialistic worldview!

Scientific method has been a great gift to our world. One of its principal means of gaining knowledge is by reducing things down to their constituent parts and analysing those parts in order to grasp the whole, e.g. by dissecting the cell, we know about DNA and that genetic flaws cause diseases. But is the scientific method the only way of attaining knowledge, or even the best way of attaining knowledge? That’s a fairly arrogant assumption. It means, for example, that what a traditional aboriginal person calls “knowledge” can be considered to contain as much knowledge as a nursery rhyme. And yet, those stories have enabled them to live permanently in an environment in which we would only last a couple of days, with our so-called superior knowledge. To believe that knowledge gained through the scientific method is the only real way to understand the world, is like suggesting that all the cultures of the world have merely been part of the journey towards our way of seeing the world. It’s like we’re at the top of an escalator, the pinnacle of intelligence. No wonder western cultures saw no reason to respect other cultures. What could we learn from them?

While the scientific method enables us to learn much about something, does it reveal all there is to know, and all that matters about that entity? The eastern philosophy of Taoism teaches us that often what matters most about something is often what cannot be seen. For example, you cannot see the space in a room, but it makes all the difference if it’s there or not, because if there is no space, it’s not a room, it’s a solid cube. Also, as Christianity has always held, and Quantum physics seems to assert, relationships between things can be more significant than the things in their own right.

Science challenged the church’s claim that the sun revolved around the earth, which reinforced the belief that the world was made for our benefit. Early scientists such as Galileo challenged that view and said that it was actually the earth that rotated around the sun. Developing this knowledge further, science has shown that not only are we not the centre of the world, but we are only a minute presence in the universe. That is a massively different understanding of our place in the scheme of things. Ironically, the discovery that the world doesn’t exist for us alone, has led us to treat it as if it does. At least in the past, people thought the world had value of its own, and it was only with respect to that God-given value, that we could know our place.

In the conflicts between Galileo and the church, the church was reinforcing its power to control the way people thought. But as well as that, it was trying to uphold the value of the intangible. In other words, it is not true that only what can be seen, touched, tasted, and measured, is real. Matter is not the only thing that is real. (Some held the view – and even now also, that other things were at most, real in a secondary sense. That included things such as feelings. They weren’t real in themselves, but were only the product of chemical reactions in the body.) The church saw great dangers in that, and wanted to assert that things such as feelings and love are real. We can’t measure them, but they are just as significant in what makes a human being, as are bones and muscles. The danger of saying that love is not real, is that it removes the greatest impetus for treating others fairly. As a result, we have an economic system that treats people as units to produce things, or to consume things.

Christianity challenges this worldview by its assertion that both spirit and matter count, in fact by God becoming matter, in Christ, we’re reminded that matter is as real and as valued by God as spirit is.

Then there is the theological worldview, which was invented by theologians to avoid conflict between science and religion. The proposal is that science deals with how the world is and religion deals with why. The two areas do not conflict because they are not concerned with the same thing. A product of this thinking is the view that religion and politics don’t mix. The flaw in the theological worldview is that it fails to take seriously the interaction between spirit and matter. The human being is an example of that. We are spirit and matter. We know that the state of the spirit can influence the state of the body.

Another worldview is the ancient worldview. It is the worldview of the bible, and of many ancient cultures. In this worldview, the world is divided into up and down. Up is heaven, where God is. Down is earth, where we and other creatures are. This view made sense in its time, because things which humans could not control came from above, such as the weather, and people experienced life as depending on what came from above. There was a correspondence between what happened in the upper and lower realms. Hence, in the bible, while nations below fight, there’s a corresponding war in heaven.

The last worldview I want to look at is called the integral worldview. The integral worldview is the emerging way of seeing the world in which spirit and matter both have a place. They are like two sides of the one coin. Two sides to reality. Like the other worldviews, there are degrees to which people hold to it. For example, some say that spirit only emerges at a certain level of consciousness, so therefore humans have spirit, but a snail or a rock does not. Others say that spirit exists at every level of being, although it may not manifest itself in the same way. So a tree has spirit, but not like the spirit of a human being, for example.

The integral worldview allows us to read the bible in a new way. All we have to do is replace upper for inner, and below for outer. The realm above, heaven, therefore, is the interior of the world, the inner, or spiritual dimension, while the realm below, the earth is the outer, or physical dimension. God in heaven is therefore not God above us, but God within us, and within the world.

The tangible and the intangible, each corresponding to, but not the same as the other. So (as Catholic theologian Karl Rahner put it:) the body is not something added to the spirit. It is the concrete existence of the spirit in space and time. Because within the integral worldview the inner spiritual and the outer physical are two sides of the one reality, there is virtually nothing in the world that is pure spirit or pure matter. Everything has both a physical and spiritual manifestation. Except God, of course, because God created it all.

I hope then, that I have given you some ways to assess various cosmologies, or worldviews, pointing out their strengths and weaknesses, but most of all to show you how the integral worldview provides a reasonable way of holding Christian cosmology and a scientific perspective together.

This description of 5 worldviews I have used is taken from Walter Wink, Engaging the Powers: Discernment and Resistance in a World of Domination.