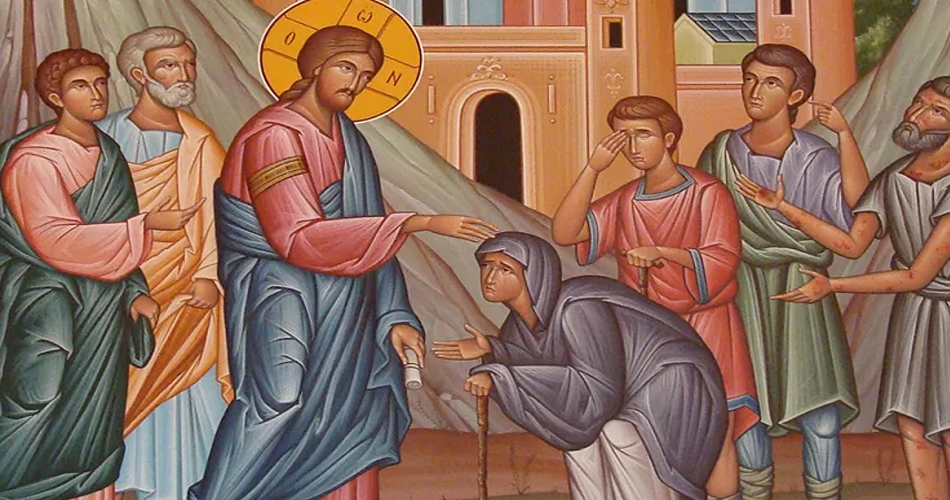 Healing is much more than a cure

It’s easy to lose faith. When we look at the world, there are so many bad things that catch our attention. If that’s not enough, personal hardship can also result in losing faith. Despite all this, the gospel encourages us to hold on to faith. In case we mistakenly believe that living by faith involves turning a blind eye to the harsh realities of life, the bible reminds us that’s not the case. The call to live by faith does not ignore what’s wrong with the world, or with our lives, in fact it is from within suffering and hardship that we are encouraged to hold on to faith. Take for example a portion of today’s passage from Isaiah (40:28ff): Isaiah says, the Lord

gives power to the faint, and strengthens the powerless. Even youths will faint and be weary, and the young will fall exhausted; but those who wait for the Lord shall renew their strength, they shall mount up with wings like eagles, they shall run and not be weary, they shall walk and not faint.

Isaiah wrote those words while his nation was held captive for seventy years in Babylon. It would be like a refugee driven from her home by war, claiming that God empowers the oppressed, such as herself, so that one day she shall rise above her oppression. Hard to see it happening, yet Isaiah does see it, or believe in it, and his suffering and dire circumstances prove that he’s not coming from a position of detachment, or ignoring harsh reality. Generally in the Bible and the great spiritual writers, we find people holding on to faith from within, or after, struggle and doubt. In other words, their faith arises or is formed in hardship. The reason Isaiah’s words are in the Bible is that for thousands of years, people have found his words to be inspiring and true. Of course though, every generation has to work out what that means for themselves, and every individual too.

Our gospel story (Mark 1:29ff) can help us to trust Isaiah’s in words, so that we hold on to faith in the face of adversity. At first, the miraculous nature of Jesus’ healings may be a barrier to faith because they seem so unrealistic. Do we experience such things? Can such things happen today? It’s really the same question that we might put to Isaiah: does God really renew the strength of the weary and help the oppressed? So what’s going in the healing stories we read in the Bible?

To understand them, we have to differentiate between healing and cure. A cure involves the body returning to its previous state, whereas healing is about wholeness. In the gospels, cures are not presents from God, that is, they are not ends in themselves, in the way that getting over a bad cold is an end in itself, because you’re strong again. In the gospels, cures are signs – signs that God is at work in the world. The equivalent could be a beautiful flower in the garden, or the taste of a juicy nectarine in summer: small pointers to God. The purpose of cures in the gospels is so that people will pay attention to the bigger picture, which is God bringing the world to wholeness.

The reason Jesus silences the demons in the story, is that demons deal only in absolutes. They’re like a dog waiting to be fed. It only deals in two states: either there is food in front of me or there is not. A dog has no in-between position. There is no such thing as I am going to be fed, so will wait patiently. When it comes to the well-being of individuals, the demonic view is that people are perfect or imperfect, that is, physically and mentally ‘flawless’ or they are physically or mentally ‘defective’. When I carry on like that, I see any illness as a defect in my life, a set-back, something which prevents me from being the perfect person I wish to be. The same goes for mental or psychological weakness or illnesses. As the demons who Jesus silenced speak only in absolutes, they would call a cure by Jesus the granting of perfection, thus making Jesus into a miracle worker, but worse, a miracle worker who selectively grants perfection to individuals. Silencing the demons shows that Jesus does not use the absolutist language which classifies people as either ‘perfect or imperfect’. It’s language which belongs to the honour-shame (ins and outs) culture of his day and ours too.

Jesus is not about curing, but healing. He doesn’t want to merely restore people to peak fitness or perfect mental and psychological power, but to all-round wholeness. In the gospel story, that’s reflected by Peter’s mother serving Jesus and his companions after her fever is taken away. It doesn’t mean she has been restored to her role of catering and washing dishes, rather, it shows that service is integral to human wholeness. That is the humanity Jesus is creating. It is no small thing though, for Mark describes Simon’s mother in law’s service in the same way he describes the action of the angels who minister to Jesus after being tempted by the devil in the wilderness. Service is not about servitude, but about commitment to the well-being of others. True wholeness then, involves communion with God and other people. The curing of a person’s disease is for them alone, whereas an individual’s healing also involves restoration and strengthening of their relationships with others.

Healing, or becoming whole, is not tied to a cure. In fact, healing begins in sickness. The reason is that sickness or suffering causes us to lose our grip on life. Our defences are down. That makes us open and less resistant to the pull towards wholeness. For example, sickness usually slows us down, so can make us aware of having too much going on in our lives, if it’s the case. Another outcome from sickness and suffering is that it often causes us to re-evaluate the meaning of our lives. It’s not that God makes us sick, but that we stop resisting God’s attempts to wake us up, or grow up, let go of what holds us back, or holds us apart from others. Healing reconnects us to our deepest centre, and through that, we connect to God and each other. (John Shea, Eating with the Bridegroom) That deeper, more meaningful way of living, is described as new life by Mark, for he uses the same term for Jesus ‘lifting up’ Peter’s mother-in-law as he uses for Jesus’ resurrection.

The opportunity is there too for us. In our sickness, in our physical and psychological struggles, in our having to adapt to growing older, where and how are we being led to greater maturity? – to grow up, to let go of what burdens us and makes us less human, to forgive, to accept, to love ourselves and so on? There is so much more on offer there than the possibility of a cure. Hopefully of course, that may come too. Who knows what determines that? All we can do is commit to what provides the best chance for it, but at the same time remember that life isn’t found in absolutes. Life, or wholeness, doesn’t come as a flawless existence. Some of the most whole human beings are physically flawed, or mentally or psychologically imperfect. It’s about the quality of our humanity, not whether we are like models for gym membership.

Returning to the big picture and Isaiah’s ‘promise’ that God gives power to the faint and strengthens the powerless, does it mean we will see world peace soon? Probably not. It’s fine to hope for it, but not tie ourselves to it, just as not tying ourselves to cures. Mostly, the healing God brings to the world is going on internally and so won’t make front page news. Spectacular instances of progress in peace or cooperation are great, but like cures, they are just reminders of the bigger picture. In terms of wars and other forms of oppression, we are in a better position to understand how God works to bring about healing and wholeness in the world out there, the more we respond to God drawing us to healing and wholeness within our lives, for they are always connected.