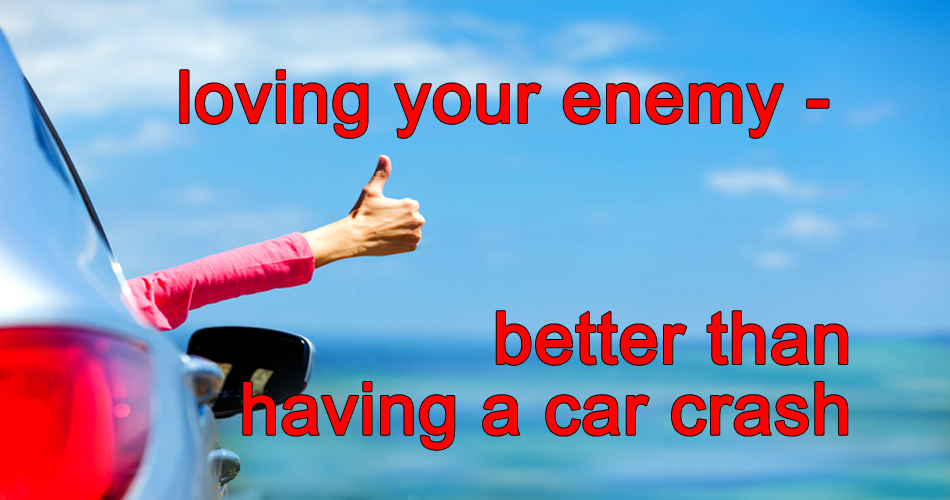 If anyone thinks Christianity has nothing to offer, they should be directed to the most radical words of Jesus: Love your enemies. In a world with so much violence and so many resources tied up with it, there is perhaps nothing more worthwhile aspiring to than being able to love your enemies. It addresses the big picture of nations getting on with nations, but also our daily lives, in which even someone who is meant to be a friend, can hurt you with a few words. Enemies don’t have to be people who are locked into opposition with you, for the purposes which Jesus is talking about in today’s gospel (Luke 6:27-38), they include anyone who acts against you. So he starts with those who hate you, includes those who publicly humiliate you, and those who take from you and extends to those who pressure you into doing something you don’t want to do. Loving my enemy addresses the effects of having an abusive grade one teacher which may be still lingering and continuing to drive some dysfunctional pattern in my life, but also came into play yesterday when a driver sped past me on the inside lane and I felt tempted to increase pressure on the accelerator so that she would end up jammed behind a parked car instead of being able to slide in front of me, thus forcing me back one space from the place in traffic which according to the rules of driving justice, belonged to me. As I refrained from doing so, and she did slip in front of me taking ‘my’ place, she extended her arm out the window, giving me the thumbs-up sign, and immediately something inside of me acknowledged that

loving your enemy was better than having a car crash.

We can all think of circumstances in which it is possible to love your enemy, and we can all think of circumstances in which it seems impossible. Yet Jesus is not a teacher of ideals, but only what is actually possible. That means loving our enemies is not something we do by simply trying hard, but rather is something we can do because of what God has done. In other words, God makes it possible. And we maintain the connection between what God has done and what we can do through repeating to ourselves the Lord’s Prayer, and of particular relevance here is the line Forgive us our sins as we forgive those who sin against us. We can love our enemies only because we forgive their sin, and we can forgive their sin only because God forgives ours.

Last Sunday we heard St Paul talking about the centrality of the resurrection to our faith. It is so important that Paul says if Christ was not raised from death, then we Christians are to be pitied more than anyone else. By that he doesn’t mean we are to be pitied because our faith is based on something which might turn out to be wrong, namely, that we’ll go to heaven after we die. That’s not really what Jesus’ resurrection means for him. The resurrection, for St Paul, means that we are forgiven our sins and that forgiveness makes us free. In a nutshell it works like this: Jesus was betrayed by his best friends, but when he came back from death, instead of being angry with them or taking out revenge on them, he forgave them. He didn’t say ‘what the hell did you do that for?’, or at the very least say they owed him one. Instead, he continued to love them. In that way, he broke the cycle of violence and revealed to them that this was what God is like: no violence, no punishment. How would you respond if someone acted like that towards you? Imagine yourself in that position: you betray a good friend, resulting in his death, then he comes alive again and comes to see you, but is totally free of anger and vengeance. No doubt you would feel highly grateful, but also a tad embarrassed. Sorry about that would seem rather inadequate. So the rising from the death that you helped inflict upon your friend and his or her coming back to you in friendship that is so deep that they go out of their way to make sure you’re aware of it, is experienced as perhaps a wonderful gift, but more like a broken heart. That’s why in the Book of Common Prayer Evensong, one of the verses used to warm up the audience at the beginning of the service is from Psalm 51:17 – the sacrifice God likes is a broken heart, a broken and contrite heart, O God, you will not despise. It’s not instructing us to grovel to God. It’s saying when we discover that the pattern which drives our lives is so destructive, but God doesn’t hold that against us, we’re going to feel that as a deflation, an undoing. It’s a humbling, in the recognition that we have all these plans that we think are so important, and we feel so right about how we see the world, but have actually got it all wrong. But the great thing is that it doesn’t matter. In other words, God doesn’t hold that against us, so we are free of being bound by it. That’s forgiveness of sin.

As God’s ongoing unconditional love helps us to accept that it’s okay that our schemes to run the world are so silly and even destructive, and that we’re so stuck in them and driven by them, then we begin to relax, and instead of being driven by fear of missing out and things not going our way, instead we begin to be open to other ways of living and so our desire begins to change. We want to live differently and we want to relate to others in a different way. This is what forgiveness of sins is about. It’s not God sorting out a moral problem – dealing with our naughtiness. It’s God freeing us from our small world so that we can be more alive.

Understanding forgiveness of sin is the key to loving your enemy, because you see that your enemy is your enemy for precisely the same reasons that you experience forgiveness. In other words, they are just as caught up, just as driven by fear of missing out, fear of things not going their way as you are, so they’re trying to run the world just as you are, and that’s why they push in front of you at the supermarket, cut you off in traffic and belittle you in grade one. Unless you can get that and allow yourself to be undone, unless you allow your little kingdom to be dismantled at least a bit, then forgiving others and loving your enemies will be nothing other than hard work, and probably impossible.

Loving our enemies, forgiving those who sin against us, is possible because God forgives our sins. And they go hand in hand, because the same mechanism is at work in forgiving others, as is at work in our being forgiven by God. That means Jesus isn’t saying unless you’re nice to others by forgiving them, God won’t be nice to you and forgive you. No, what Jesus means is that unless you let go of a certain way of relating to others, you won’t be able to receive the setting free and enlarging of your world that God’s forgiveness can be for you.

A few considerations to keep in mind regarding loving our enemies. The first is that it is about being free and not weighed down by the actions of others. The most obvious example is when we harbor grudges we carry a prison with us. So this is not something God forces us to do. It is a gift, but won’t always feel as if it is. The less we accept our own sin being forgiven, the harder it is to forgive others.

Another thing is that God never wants us to be doormats. There is nothing good in allowing ourselves to be hurt by others. Mahatma Gandhi, that great lover of peace and non-violence, said it is better to be violent than to be a door-mat. To love your enemy requires spiritual maturity, but that can be found in a three year old. Also, to love your enemy or forgive one who sins against you, is not to act as if what they did to you didn’t happen or doesn’t matter. It’s just that you’re choosing to respond in a certain way, which will cost you something.

Last of all, sometimes forgiving another can take a long time, but don’t give up trying, because the One who forgives our sins is always trying to help us experience the same freedom he has.