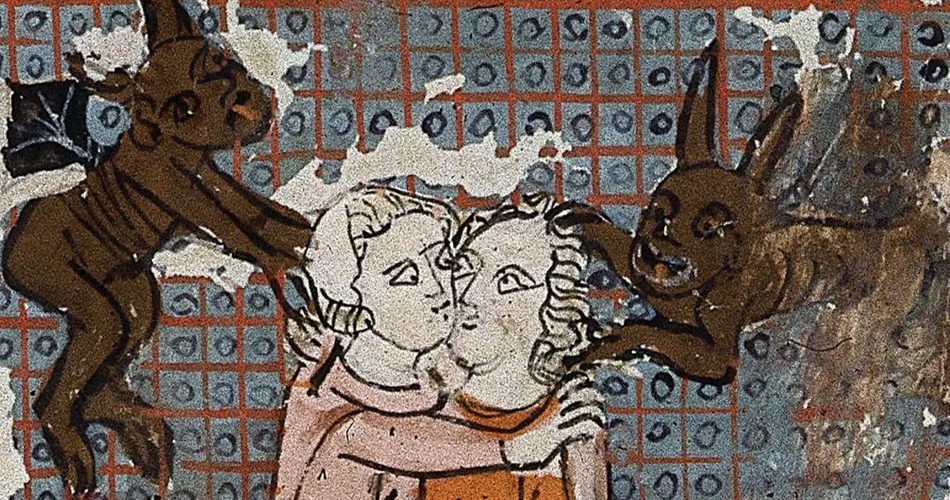 Jesus goes to the synagogue and encounters a man possessed by a demon. This is not something that is easily accepted today. You may find talk of demons too disturbing, or ridiculous and so dismiss this story as belonging to another time, when people believed such things. At face value, Jesus comes across as a kind of magician, whose power is greater than the evil forces he battles with, which makes Jesus into someone who isn’t relevant to life as we understand it.

But ask yourself what you think demons are and how you came to that understanding. Do your ideas come from watching movies? If that’s so, then you can park those ideas as fantasy. Perhaps your ideas about demons have come from taking biblical stories literally. That’s equally unhelpful, because demons are really metaphors.

What I want to suggest to you is that talk of demons in the bible is actually a way of representing the power dynamics in human behaviour. The important issue regarding spirits of any sort whether they are life-enhancing or life-denying. As the gospels present Jesus as the ‘lord of life’, of course he is going to have power over any spirit that is life-denying.

That’s why the angels (life-enhancing spirits) are his friends and the demons (life-denying spirits) are against him. As ‘lord of life’, Jesus commands the spirits to do as he says. They do not have power over him, for he is God, who is not bound by the same power mechanisms. All of this is pretty grand and deep, but as we see in today’s story (Mark 1:21ff) it’s part of everyday existence. That in itself is a big claim, because we might think that power dynamics is only part of politics or where people are in conflict with one another, and so not to do with everyday existence, but the perspective the gospels give us is that power dynamics are integral to everyday existence, and if we are ignorant of that, then we will be subject to the control of those powers without realising it. One of the goals of the biblical writers is to wake us up, to reveal or unmask, the powers that can influence and control us.

In describing the demon possessing the man in the synagogue as an unclean spirit, the gospel writer helps us understand the power dynamic at work. If something is ‘unclean’, it can also be ‘clean’, so we must be talking about something that can be one or the other. When people are involved, ‘clean versus unclean’ is like ‘in versus out’ talk. It’s labelling things in terms of opposites, it’s the same as speaking in terms as acceptable versus unacceptable, righteous versus unrighteous, proper versus deviant. This is rivalry or judgement. In Jesus’ day, people were divided into acceptable versus unacceptable, such as healthy people being acceptable, lepers being unacceptable; Jews acceptable, gentiles unacceptable, women who remained faithful, committed and monogamous: godly, righteous and therefore acceptable, women who committed adultery: evil and to be cast out (i.e. condemned and stoned). This division into ‘clean and unclean’ is found in all cultures and subcultures. It is so pervasive, that even when we get it and choose to let go of seeing people in this way can soon find ourselves labelling those who continue to do it as unclean (of course we don’t use those terms though, we would more likely say they are judgemental or self-righteous.) And so we’re back in the game again.

Back to the gospel story – the unclean spirit reacts aggressively to Jesus.

That’s to be expected because they represent opposing power – Jesus gives life to people, the unclean spirit takes it away or controls it. Let’s say, for argument sake, that the bloke Jesus has met with the unclean spirit, was the synagogue treasurer and embezzled all its money. It shouldn’t be a surprise to us that he isn’t its most esteemed member. No, he is its most hated member, and has been cast out – he’s not even allowed to step foot in the synagogue. Yet he has weaselled his way back in. Maybe he’s wearing a wig and fake moustache to disguise himself, so no-one noticed him. But his disguise doesn’t fool Jesus, because his being hated by the synagogue members and cast out has transformed him, so he now sees himself as they see him. That is what ‘being possessed by an unclean spirit’ means. This man, this ex-treasurer, feels he is a non-person, that he doesn’t count. He has lost his worth as a person. What does that do to a person? One thing is it may drive them to grasp for power from others, in order to gain a sense of worth. Such people will be attracted to those they perceive able to dish out power to them. Those people will be both attractive and a threat to them. Hence the unclean spirit in the man challenges Jesus –virtually saying ‘what the hell do you want with me?’ He’s sussing out whether Jesus is a threat or a possible source of affirmation. He decides Jesus might restore his honour, if he shows deference to him, which he does by honouring him as ‘the Holy One of God’. But that is a priestly title for one with a role in the temple cult, which is a sacrificial institution. In other words, he’s saying to Jesus ‘I see you are a man with power to include me or cast me out of this community (synagogue)’. Jesus rebukes him, commanding him to be silent, for that is exactly what Jesus is not, as he does not operate within the clean/unclean perspective of rivalry and judgment, which sacrificial cultures and institutions do.

Jesus operates within the perspective of divine love, which is unconditional, so yes, Jesus can grant this man life, he can give him worth, restore his sense of value, not by judging him, but simply by affirming him as worthwhile. And that involves discounting and so dismantling the mechanism of judgement which labels him as unclean. That is Jesus’ authority. He can author life, write life, create life, through affirmation, through unconditional love: the power to encourage a person to be themselves, to create themself, create their life. That is the power of the Creator at work.

The healing of the man with the unclean spirit is a process of him being enabled to move from being dependent to interdependent. He became subject to the control of the synagogue (community) by depending on it as the source of his worth. In other words, if he was accepted by the synagogue, then he was acceptable, worthwhile as a human being; if he was rejected by the synagogue, then he was not. Such dependence worked for him as a child, when he had to depend on others for safety, security and direction, but continuing to live that way made him subject to the power of rivalry and judgment which brews within communities. Often when people realise they are dependent upon others and so subject to how they value them, for example, they react by becoming independent. Hence, the possessed man acts independently of the synagogue’s rejection of him, dons his wig and fake moustache and attempts to gain kudos from Jesus, but such attempts to get free of dependence by acting independently are doomed to fail, because the dependence is internal – the individual has adopted it as a way of coping with life. He depends on how others see him and how others treat him as the source of his worth, or lack of it. Reacting to external influences won’t free him. In the same way, if we depend upon the circumstances of our lives to dictate our worth, we shall not be free.

Being freed from the demon is being no longer run by culture or institution or life’s circumstances. Something like Jesus identifying the unclean spirit in the synagogue and casting it out of our lives, occurs for us when following his Way allows us to see when our dependence on others’ opinions of us, or dependence on life’s circumstances as dictating our worth, means we are being driven by them and not by ourselves. In showing us how these mechanisms work, the gospel writers are giving us a way of breaking free of them, so that we can allow the true author of life, the One who writes our life, to create us, by encouraging us to create ourselves, within relationships that are interdependent.