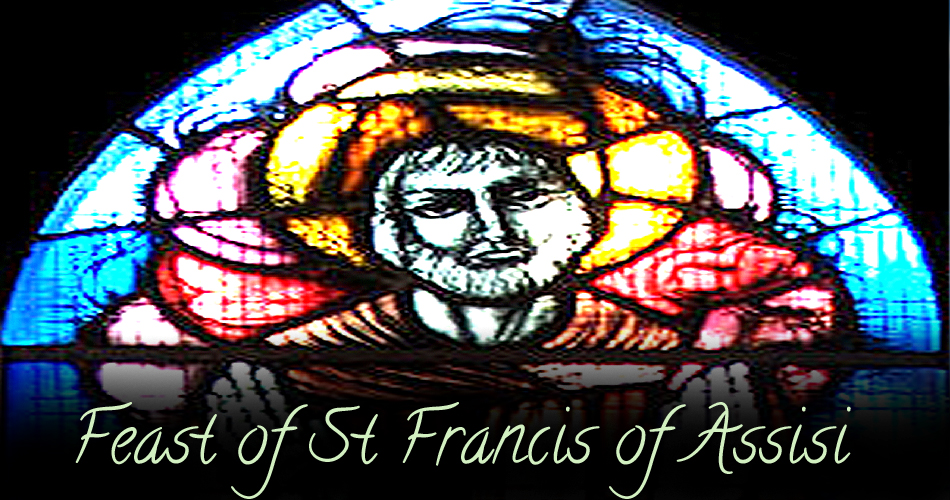 Friday was the Feast of Saint Francis of Assisi, and as a member of the third order of Saint Francis, I asked Andy if it would be okay for me to preach this weekend. I usually worship at Crafers.

The fourth of October is also the anniversary of the death of Saint Teresa of Avila… Both Saint Francis and Saint Teresa have been very important teachers for me.

Saint Francis is probably most widely known as the patron saint of animals and the environment, but he is also the patron of the poor, lepers, and the forgotten. To me, he is the saint of invisible things; things that the world proclaims to be without value: yes, he is the saint of creation, of birds and pretty things, but he is also the patron saint of biting bugs and slums. He is saint of the substrate of tiny, broken fragments that has settled as a layer below the rest of society, saint of those crushed by the weight of it, unable to get up on their own. Francis is the patron saint of the unwashed difficulty of human existence. He met Christ in this space. I love that our animals, and nature around us, are so often our refuge and comfort when we are most downtrodden: there is a real unity to Franciscan spirituality, within, this.

So, I’ll be speaking about both Saint Francis and Saint Teresa of Avila today.

I recently got back from a trip to New Zealand, where I spoke at an academic conference about my PhD research. My paper was about Teresa of Avila and Thomas Aquinas in George Eliot’s novel, Middlemarch. So I’m speaking today about a cluster of considerations that have impacted me around these historical figures, but I’ll be speaking more out of a sense of personal journey than academic considerations… I’ve learnt over time that it’s considerate to give people a choice about whether they really want to experience both barrels of academic considerations, especially when it comes to nineteenth century Hegelian theology and histories of religion, power, and politics. You’re welcome.

But anyway, the central consideration for my research paper was Saint Teresa’s teaching about holiness as friendship with God, and how George Eliot contrasts this with Thomas Aquinas’s proclamations. In particular, Aquinas wrote that it is obedience to tradition and reason that define Christian life. Aquinas felt so strongly about this that he also said that the best thing for both heretics and for society, was for those “heretics” to be executed. Heretic is code for people who didn’t submit to tradition and his systematic, hyper-rationalistic statements about God.

So in Middlemarch, Teresa of Avila is an analogue for Dorothea Brooke, and Thomas Aquinas represents her overbearing and alienated husband, Edward Casaubon. What George Eliot doesn’t explicitly point out in Middlemarch, is that historically, Teresa of Avila was subjected to quite extreme treatment from the Spanish Inquisition, and that it was Thomas Aquinas’s theology that was used to justify the Spanish Inquisition.

In Middlemarch, Edward Casaubon is constantly absent; he isolates himself within a whole lot of symbols of scholarly respectability, while Dorothea, his young wife, reflects internally on how she can be a better human, and what is going on in the lives of the people around her, so that she can help them. Which again, is pretty similar to Aquinas and Teresa of Avila, in that Aquinas left a legacy that was pretty markedly on the spritz, while Teresa of Avila encouraged people to know God inside themselves, via the process of also understanding the truth of who they are.

Teresa of Avila wrote quite a bit. Her most influential work is The Interior Castle, which describes exactly that. The outer rooms of the castle are the spaces she reached first: the cognitive modes that she employed in order to try to come closer to God. But all of these attempts were really just outer shells; they looked good but they were veneers that didn’t attend to the deep truths of selfhood, for Teresa. But as God called to her, she was able to spend time with the things in herself that she initially thought were separate from God; things that she thought couldn’t be included in where Christ had come to meet her.

Ultimately, she found that there was no part of her self that was not fully loved in Christ, and her accounts of this union with divine love are very beautiful.

Historical accounts say that she really got the attention of the Inquisition when these prayer experiences started causing her to levitate. That’s difficult to evaluate historically, but what definitely happened was that she enabled the nuns of her order and the surrounding communities to understand that they could know, for themselves, the full depth of sacred connection. They didn’t need permission, or scripting, or control.

As this realisation spread, it fundamentally disrupted the Spanish Inquisition as part of the Catholic counter reformation of the sixteenth century. Teresa is now also referred to as Saint Teresa of Spain. Arguably, Middlemarch reignited awareness of her contribution, because within eight years of its publication, there was a very broad popularisation of Teresa of Avila that culminated in her being named a Doctor of the Church in 1970: the first female one, alongside Saint Catherine of Sienna.

My Franciscan journey has had a lot of correlation with the experiences that Teresa of Avila describes, although there hasn’t been any levitation, and I’m not at liberty to comment on the current state of the Inquisition in this context. But there were a whole lot of parts of me that I thought needed to be partitioned off from my experience of God… My interior castle had a bunch of really awkward clutter in the back rooms, and it wasn’t the kind of space where you could bring guests.

But I could hear God calling me, and I asked God to please call more clearly and more loudly so that I could understand where to look for God. What I expected was an escapist solution; a kind of anaesthetic and drawing away and out from me, into another place, where God would be. But instead, God started to call me into those rooms… rooms filled with memories of poverty, and homelessness, and some quite violent experiences. Rooms where I never felt loved, just damaged. Things that I thought it was best to just keep packed up. And it took a long time. And it took some very wise and skilled companions in that process.

When I first met my husband, Michael, things weren’t very good. I had quite severe PTSD. I’d get so startled when he’d sneeze that I’d start shaking and burst into tears. I’m quite attached to my dignity. I didn’t like being this way.

These days, I’m working towards ordination, and on Friday I had the last of nine hours of psych assessments in that process. And on the Feast of Saint Francis, a clinical psychologist sat across from me and told me that their nine hours of rummaging through my interior castle led them to be quite sure that I don’t have PTSD anymore. And this is, indeed, the case.

The Franciscan relevance of this is that the same Christ I meet in my deepest self, also delights to reside in each of us.

Our Old Testament reading and our Psalm today make it very clear that when vulnerable people cry out to God, God hears, and responds. And within that, God asks us to hear and respond, also. This sacred compassion is at the core of us, and we can abide there.

I’d like to finish by returning to our Gospel reading for today:

At that time Jesus said, “I thank you, Father, Lord of heaven and earth, beause you have hidden these things from the wise and the intelligent and have revealed them to infants; yes, Father, for such was your gracious will. All things have been handed to me by my Father; and no one knows the Son except the Father, and no one knows the Father except the Son, and anyone to whom the Son chooses to reveal Him.

Come to me, all you who are weary and are carrying heavy burdens, and I will give you rest. Take my yoke upon you, and learn from me; for I am gentle and humble in heart, and you will find rest for your souls. For my yoke is easy, and my burden is light.’

May our Lord of grace abide with you in your very depths, and may you be at peace in the full awareness that you are fully loved, in your very deepest truth.

And may we, the communion of saints, enfold you in wisdom and gentleness in that deepest truth: the truth that reveals the soothing warmth of holy friendship.